“I’ve been performing cultural Filipino dances since I was five and that was my introduction to the arts,” says Jesca Prudencio. While her parents felt her interest in theater was just a hobby, she’s proved them wrong. “I’m like, you wanted me to perform in front of people and sing karaoke and all those things. I just took it very seriously.”

Prudencio graduated with a BFA from NYU/Tisch School of the Arts and worked with acclaimed writer/director Ping Chong for five years as an artistic associate. She’s currently an MFA candidate at the University of California San Diego, where she is the first Asian American female director to be admitted to UCSD’s prestigious program.

Recently, she founded the nonprofit theater company People of Interest. Its debut production is Bennett Fisher’s Campo Maldito, now performing as part of the New York International Fringe Festival and soon to be seen at the San Francisco Fringe. I saw the first performance of Campo Maldito’s FringeNYC run, and spoke with the enterprising young director about the piece a couple days later.

DAN BACALZO: How would you describe Campo Maldito, and what attracted you to the script?

JESCA PRUDENCIO: Campo Maldito is a dark comedy about gentrification in San Francisco. Ken Ingersoll is the CEO of a tech startup in the gentrified Tenderloin district, and his office is cursed. The business is about to fall apart and he feels his last resort is to bring in a Santeria priest, Hieronymo Acosta, to exorcise the spirit that’s in the room. In the play, the two characters seem so different but we realize how similar they are, as well. Something I’m really interested in as a director is how to make addiction, alcoholism, and those ghosts scarier than real spirits.

DB: I really liked that aspect of the play. The priest character is haunted by a history of alcoholism and drug abuse. He had to get away from the Tenderloin where he grew up and now he’s confronting his past.

JP: He had to leave everything because he felt the whole thing—this home, this neighborhood—was a disease that was leading to his downfall. He had to leave to totally cleanse himself. What does it mean to come back to this, to these ghosts that have stuck with him? That’s been a big connecting force for me.

DB: How did this script first come to your attention?

JP: Ben and I are going to be second years at UC San Diego. On the first day of school last year, I was paired with him to direct his play, Don’t Be Evil. It was also a dark comedy and I really connected to his work. Ben grew up in Silicon Valley and I think that’s a unique perspective he has as a writer.

DB: The play takes a provocative look at race and gentrification. What’s your own take on the way these two things intersect?

JP: Ben was so passionate about these issues in San Francisco, but I thought if we do this play we have to bring it to New York because it’s something that is ongoing here, as well. To see it on stage physicalized in this way is really important, and that’s the reason I thought it would be a good opening show for People of Interest. I want our work to be about the people, about the issues we’re dealing with right now.

DB: You mentioned you’re a student at UCSD. Can you talk about your experiences with the MFA directing program?

JP: There are only five directors in the program, two in my year. You get to lead a big team, and you have the resources of La Jolla Playhouse. You’re able to dream big. I spent ten years in New York, directing at NYU/Tisch and working with Ping Chong, producing my stuff at night and on the weekends. So to just do this all the time, all day and to have the resources to really explore your ideas to the fullest extent has been an absolute pleasure. There’s nothing stressful about San Diego. It’s just beautiful and an easy drive everywhere and great fish tacos. It’s a great place to study for these three years. But when I step on New York City ground, there’s something that draws me back. I know that this is home.

DB: You mentioned you had access to resources at La Jolla Playhouse. Can you elaborate?

JP: La Jolla Playhouse is part of the UC San Diego campus. They call that area the theater district. Their costume shop, set shop, and sound shop take care of all our technical needs. We’re also in the same spaces where the La Jolla Playhouse season performs their shows, which is great. I didn’t know that before I got there. The directors also have a residency where we assistant direct a show. I’ll be second assisting The Hunchback of Notre Dame, Disney’s new musical that’s going to open this fall. I’ll be sitting in on those rehearsals, which I’m pretty excited about. 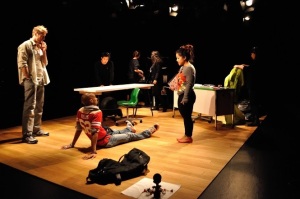 DB: Is your theater company, People of Interest, connected to your program?

JP: It’s something separate. Working for Ping Chong for five years as his artistic associate was so invaluable. He’s someone who started a company based off of his own work that is over 40 years old now. In my mind, I always knew I wanted to do something like that.

I founded People of Interest as a platform for me to create new work with artists around unique individuals and stories that I think aren’t told very often. Coming from Ping, I have an interest in interdisciplinary work, with the understanding that every aspect of the production—dance, text, song, the visual—is integral to telling the story. I also do site-specific, flash mob work. I worked with the Asian American Arts Alliance on their Locating the Sacred Festival. We did a site-specific dance piece in Washington Square Park. Also, working with Ping one of my main projects was the Undesirable Elements series of documentary theater works. I’m interested in seeing how the years doing that has influenced me, wanting to do work that is for the people, by the people, using their stories as individuals. I’m definitely interested in thinking outside the box, playing with form and focusing on new work.

DB: One of the things about Ping Chong, of course, is that he writes a lot of his own theater pieces. Is that also something that interests you?

JP: Devised work has definitely been a big part of what I do, and I’m interested in the process of generating with actors and writers in the room. I did write and direct an Undesirable Elements last year with Ping Chong, so I feel with documentary theater and community-based work, I want to continue writing in that sense. But for plays and musicals, I’m looking for collaborators and writers.

DB: You’re taking Campo Maldito to the San Francisco Fringe Festival next. Any changes planned as a result of this FringeNYC run?

JP: The show is pretty set now, but what we’re really excited about with San Francisco is that it’ll feel like a site-specific version. The theater where we’re performing is in the Tenderloin. We’re going to walk out of the theater, and it’s going to be those same streets that Ingersoll and Acosta talk about. We’ll be right near the Twitter office, and we’ll be touring all the places Ben wrote about. The show is going to be in a theater, and part of a festival, but site-specific. I’m super excited to see how that changes the play and how the audiences will take it.

Campo Maldito, part of the New York International Fringe Festival, performs at Teatro SEA at the Clemente (107 Suffolk Street) through August 23. Tickets are $18 in advance, $24 at the door. The show plays a variable schedule. For tickets and more information, visit www.peopleofinterest.org or www.fringenyc.org.

For more of my FringeNYC coverage, also check out my list of shows with Asian or Asian American connections and reviews of Nisei, Princess Pyunggang, and Forgetting the Details on this blog, my preview of LGBT-inclusive works that I wrote for GLAAD, and my NiteLife Exchange reviews of MANish BOY, No One Asked Me, Bedroom Secrets, Joel Creasey: Rock God, The Sun Experiment, Riffs on Race, Love and War: The Musical, Urban Momfare,  Olympus Records, and Behind Closed Doors: The Musical.

Dan Bacalzo is an Associate Professor of Theatre at Florida Gulf Coast University. He received his Ph.D. in Performance Studies from New York University and has previously taught in the Dept. of Drama at New York University and the Asian American Studies Program at Hunter College. He is the former artistic director of Peeling, an Asian American writing/performance collective. He wrote and performed in the solo shows I’m Sorry, But I Don’t Speak the Language and Sort of Where I’m Coming From, and is also the author of the one-act play Say Something. He currently serves on the literary board and as dramaturg for Guinea Pig Lab Theatre. He worked over 15 years as a theatre editor and critic in New York City, including eight years as managing editor of TheaterMania.com. His academic publications include articles and/or reviews in Theatre Journal, TDR, and The Journal of American Drama and Theatre.