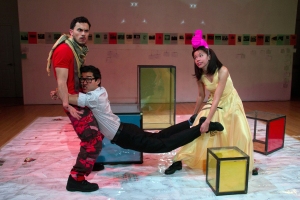 A performer in playwright/director Kyoung H. Park’s TALA wears a pink boot on her head. This is one of the many unexplained details embedded within this ambitious, poetic, occasionally moving, but ultimately frustrating performance piece making its world premiere Off-Off-Broadway at University Settlement.

The script intertwines narrative threads set against the political backdrops of two September 11ths. In one storyline, Pepe (Rafael Benoit) and Lupe (Flor De Liz Perez) are either on a date or a secret revolutionary mission (depending on which one of them you ask) on the southern Chilean island of Chiloé on September 10, 1973 – the evening before a military coup overthrew Salvador Allende, Chile’s democratically elected socialist president. The second storyline is a series of autobiographically based tales about Kyoung (played primarily by Daniel K. Isaac but also occasionally voiced by the other two performers), beginning with how the terrorist attacks of September 11, 2001 affect his life as a Korean-Chilean playwright in New York who gets “stuck in a broken immigration system.”

The three actors are all compelling performers. Isaac is particularly enthralling, with a mischievous quality that helps to sell some of the more comic moments in the script. He adopts a Southern drawl when speaking as Matt, Kyoung’s ex-boyfriend (Benoit performs as Kyoung during these scenes). And there’s a poignancy to the couple’s breakup that brings a welcome complexity to their relationship dynamic.

The stage action is stylized, with many surreal flourishes. That at least partially accounts for the pink boot, but the costume piece (with credit/blame going to costume designer Elizabeth Barrett Groth) is so distracting that it makes it difficult to take any of the Pepe and Lupe scenes seriously. This feeling is exacerbated by the movement sequences the actors engage in while reciting some of the play’s more poetic passages. It’s difficult to tell whether or not these are meant earnestly or as a parody of a certain downtown performance art aesthetic. I suspect the latter, given how the piece also includes comically metatheatrical moments in which the actors appear to engage in pranks and asides to one another that demonstrate the fictional frame of the production as a whole.

The satirical tone of much of the performance tends to obscure some of the more impassioned and politically vital exchanges between Pepe and Lupe, whose dialogue, we are told, is based upon letters exchanged by Chilean poets Pablo Neruda and Gabriela Mistral. Pepe is the more militant activist, who has gone so far as to blow up a bridge to make a political statement. Lupe was once Pepe’s comrade-in-arms, but has since become a secretary. She is critical of the violent means perpetuated by Pepe. “We revolutionaries never used guns,” she tells him. “We revolutionaries use words.”

The Kyoung segments frequently and intentionally disrupt the narrative flow of the Pepe and Lupe scenes. They contain some of the most powerfully written passages of the script but are tantalizingly incomplete. We learn of a medical procedure that Kyoung and his younger brother undergo in Korea but are never told the reason it was done or how it relates to any other aspect of the show. We find out that Kyoung was detained by immigration officials on suspicion of terrorism, but that story also seems woefully incomplete. It is also unclear whether or not the stage simulation of torture is meant to be literal or symbolic.

While I do not think it is necessary for the playwright/director to provide all the answers, it would be useful for more of his intentions to be made clear.

TALA is produced by Kyoung’s Pacific Beat at University Settlement (184 Eldridge Street). The show runs through January 23, with performances Th-Sa at 8pm (no perf. 1/17). Tickets are $18/$10 student/senior. To purchase, or for more information, visit www.kyoungspacificbeat.org.

Dan Bacalzo joined the faculty of Florida Gulf Coast University as Assistant Professor of Theatre in Fall 2015. He received his Ph.D. in Performance Studies from New York University and has previously taught in the Dept. of Drama at New York University and the Asian American Studies Program at Hunter College. He is the former artistic director of Peeling, an Asian American writing/performance collective. He wrote and performed in the solo shows I’m Sorry, But I Don’t Speak the Language and Sort of Where I’m Coming From, and is also the author of the one-act play Say Something. He currently serves on the literary board and as dramaturg for Guinea Pig Lab Theatre. He worked over 15 years as a theatre editor and critic in New York City, including eight years as managing editor of TheaterMania.com. His academic publications include articles and/or reviews in Theatre Journal, TDR, and The Journal of American Drama and Theatre.